Toriko is a manga that I follow since I was first recommended it by a friend about three years ago. For those that know their anime/manga, imagine a mix of DBZ, Fist of the Northern Star, and some fantasy like elements of Fairy Tail.

The world has just emerged from an era of war, and a new era of prosperity and food has begun. This Renaissance age focuses around gourmet food as well as its acquirement and preparation. Chefs are heralded as the premier artists and philosophers of this wondrous era where to eat is to live and to live is to eat. Toriko focuses on its eponymous main character, a charismatic muscular hero who shares his name with the title, a legendary Bishokuya(gourmet hunter) who is part of the famous group known as the Four Heavenly Kings. He teams up with meek and mild mannered chef, Komatsu, on fantastical adventures that lead to the discovery of phantasmal eats. Now things get a little ridiculous in this world when you find out that aside from eating things because they are just so delicious, the more delicious a food is the stronger people become. Like…seriously strong, to the point of being endowed with super human like abilities. The story board leads them all over the world in search of foods we can only dream existed in ours.

Now the world they live in is quite a curious entity. Only 30% of the planet’s surface is inhabited by the majority of the human population. The rest of the world exhibits harsh and fluctuating climates that range from areas of extreme gravity to jungles filled with colossal creatures that could easily crush and kill thousands of men in one step. This chaotic area cannot even be imaged by satellite due to shifting magnetic poles and never ending storm clouds. However, as dangerous as these lands are, they hold foods and ingredients more tasty than anything that can be found in the human world and to be able to venture out into aptly named “Gourmet world” and return alive is an testament to amazing strength of the being able to do so.

Ingredients are measured on a system of “capture levels” and a capture level of 1 equates to something that requires 10 trained hunters armed with heavy shotguns to take down. Okay, so more crazy comes in here when you learn that the things that they hunt and eat take on a whole new level of challenge when it gets to preparing the food itself. Imagine a food that in order to cook it, one would have to defuse it like a bomb or it would actually explode and kill you, or like the infamous fugu, a puffer fish if not prepared correctly could lead to fatal poisoning. Take something like that, and increase the difficulty to prepare such dishes a hundred times, you’ll understand why chefs’ have their own superhuman abilities. 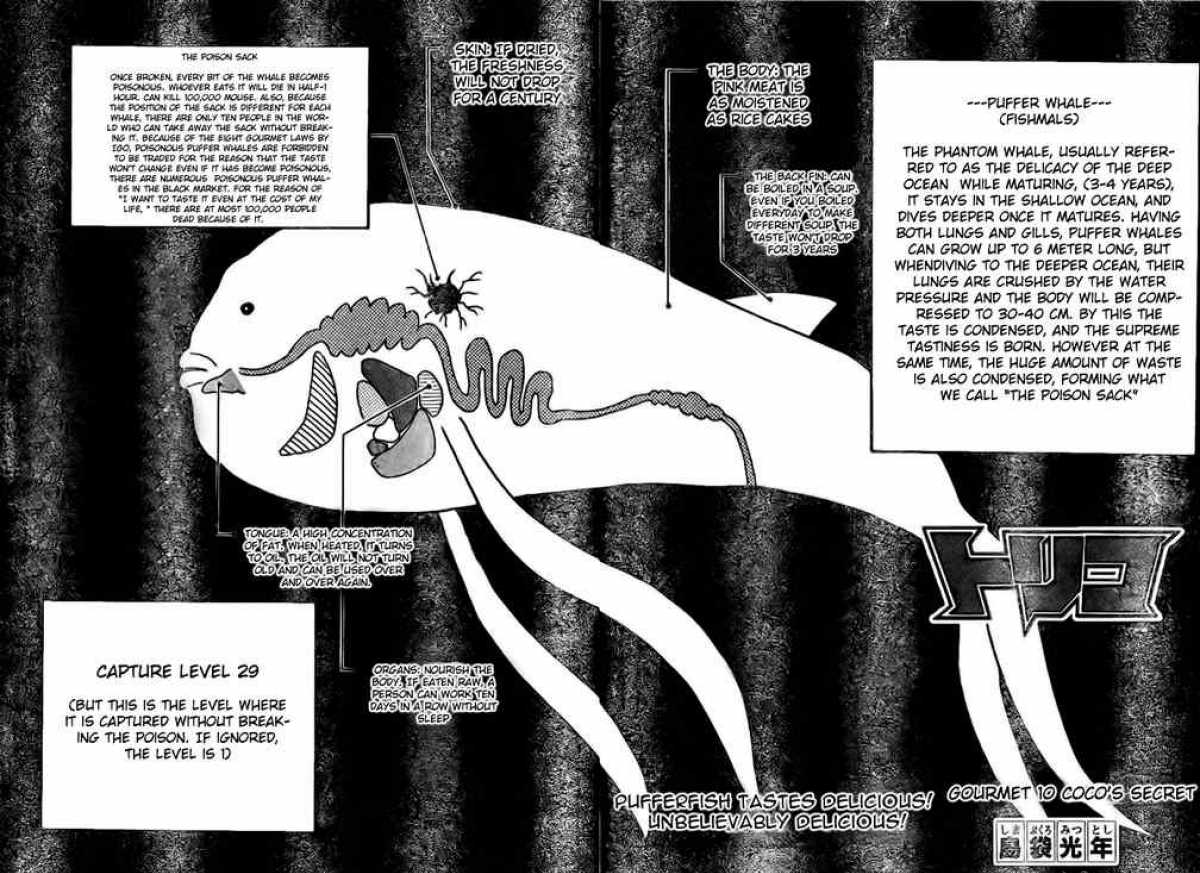 Torkio has bouts of interesting scientific-though stretched- explanations pulled from our natural world and applied to their fictitious one. Not only is it fascinating to read, but pretty entertaining with moderate amounts of combat for action, clever solutions to dire situations and creative thought of foods that I would wish possible. Read, watch, and get hungry as a result. Be sure to bring a snack when you begin to immerse yourself in the world of Toriko!

Previous: Assassin’s of the Caribbean
Next: Oculus Rift – What’s this week’s buzz?

I like to live in the world of imagination, but I'm too busy with paying the real world bills.

Signup for Free for Our Newsletters!